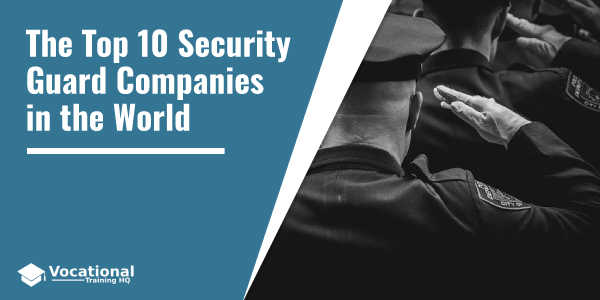 In our day and age, security is important, and many companies are offering affordable services for businesses and individuals who want to make sure that themselves and their assets are protected.

In this article, we have compiled information about the best security guard companies in the world.

One of the leading private security companies in America, Brink’s has been around since 1859.

They serve customers in more than 100 countries and employ over 134,000 people.

Brink’s has a huge fleet of armored vehicles that serve banks, mints, governments, and other industries.

The company is related to Brink’s Home Security- a branch that brings more than 15 percent of the company’s annual revenue.

CACI offers more of its services to the United States Government.

The company founded in 1962 hires more than 19,000 peoples throughout the world and is one of the top security companies based in the U.S.

Control Risks is a private security company based in London and specializes in:

The company operates in 36 countries and it focuses mostly on providing a fleet on the ground, intelligence, and locally-based expertise for large companies.

Founded in 1995, GardaWorld is a Canadian company that brands itself as a way to guard “clients in complex and ever-changing markets”

The company provides armored card services and security guard services across the globe and employs more than 62,000 people.

Garda World operates in more than 140 countries across the world.

They have a cash management partnership with Bank of America through which they process almost $5 billion every day.

Founded in 1946, DynCorp started as an aviation-focused business and later-on became a military contractor.

They currently provide a variety of services, such as:

DynCorp reports annual revenue of $3 billion and hires around 14,000 people.

Founded in Pittsburgh in 1957, Allied launched as a full-service security guard services outfit.

They merged with Universal Services of America and AlliedBarton in 2016 and it’s not a top private security company operating worldwide.

It hires more than 55,000 employees and reports annual revenues of over $5 billion.

Founded in 1874, ADT is now the leader in security and alarm services in the United States.

Before they were acquired by Apollo Global Management, the company was known as ADT Corporation.

ADT has more than 6.5 million clients throughout the world.

Founded in Stockholm, Sweden in 1934, Securitas AB is one of the most influential private security companies in the world and one of the pioneers in this sector.

The company has more than 300,000 people on its staff and operation in 55 countries.

Located in Crawley, England, G4S Plc employs around 600,000 people around the world.

This private security company markets itself as “the world’s leading global security and outsourcing group.”

This British company focuses on investigations and counter-espionage and was founded in 2002 by Alex Bomberg who worked as an aide to the British Royal Family.