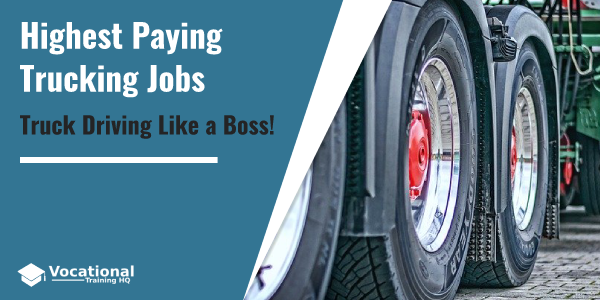 It is a well-known fact that over-the-road or OTR truck drivers have the highest salaries.

But what are the highest paying trucking jobs out there?

Among the highest paying options, there is Walmart with a rate of about $71 500 per year.

The reason for such high salaries is the type of travel, the involved hours, various road laws in each state.

Specialty drivers and long haul drivers are ranked almost on the same level as OTR drivers.

As it comes from the category name, specialty drivers are a part of a special category of drivers.

Usually, they are responsible for the transportation of oversized loads, specialty products, and Hazmat materials.

A driver needs to have some special training to perform these duties and as a result, they have higher salaries.

Also, these drivers should stay updated on industry policies as well as new laws in various areas.

One other category of drivers that get high salaries are union drivers.

The reason is that unions have some specific requirements for drivers’ salaries.

Also, these drivers need to follow not only industry regulations but some specific union rules as well.

Each union has its own specific rules so before signing a contract it is important to read the union agreement attentively.

What Specific Types of Truck Drivers Make the Most Money?

Except for oversized load drivers and Hazmat haulers, ice road drivers can also expect one of the highest salaries in the industry.

The reason for a high salary is that these drivers have a dangerous and high-risk job.

In fact, they have the highest salary rate in the industry as you need to have some specific set of skills as well as lots of bravery.

Moreover, these specialists need to know how to repair and handle various components and systems of a truck.

Usually, they work for coal mines that require lots of patience because the coal loading process is a pretty specific manner.

It is a specific process as any inappropriate action can cause mine’s abruption.

Also, oversize load drivers can expect one of the highest salaries in the sphere.

You need to be very patient and have an excellent concentration to perform this job.

These drivers need to travel with a whole team of specialists including a spotter in order to make the journey safe.

Which States Pay the Highest for Truck Driving Jobs?

You need to know that trucker’s salaries aren’t influenced by the cost of living.

It is rare when employers in the industry make more money due to the increase in loads’ prices.

According to the data, the state that offers the highest salaries for truckers is Mississippi.

Also, there are lots of specific jobs that require extra skills and knowledge.

Right after Mississippi, there is Wyoming with a salary rate of about $61 000 per year.

In the state. there are only a few specialized trucking careers that usually have very specific requirements.

The third place is occupied by New York with a rate of about $60 000 per year.

Because of a mountainous relief and severe weather, drivers with specific skills are required there.

Just keep in mind that the numbers provided in this article are average.

Your actual salaries will significantly depend on your skills and experience as well as the products you are hauling.

You also need to pay attention to possible benefits and perks when looking for a trucking career.

Read the full guide: How to Become a Truck Driver