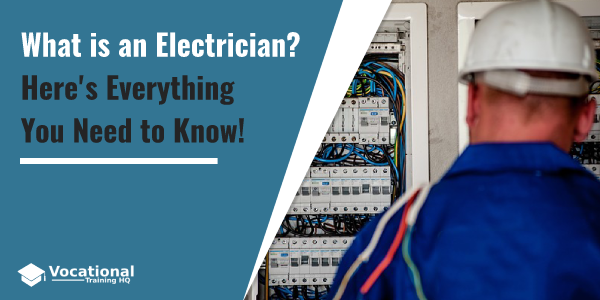 Speaking of electricians, we usually some trade professionals that are responsible for the installation and repair of wires and electrical systems in various facilities.

Nowadays, there are four main categories of electricians.

This type of electrician works in residential settings including apartment complexes and single-family houses.

Read more about what is a residential electrician >>>

These electricians work in industrial settings and install and maintain different electrical components and machinery.

They are also responsible for high-voltage electricity systems that are used in industrial manufacturing facilities.

As you can suggest from their name, these electricians work with various types of low-voltage electrical systems including data, voice, and video systems and networks.

Also, these specialists are known as Voice-Data-Video or VDV electricians.

They are mainly responsible for the installation, repair, and maintenance of phone lines and fiber optic cables.

In some states, there are combinations of these classifications.

For example, low voltage and residential electricians are referred to as one category in some states.

At the same time, others combine industrial and commercial electricians into one category.

Also, there is one other classification that is based on electricians training and experience, and includes three categories:

Just keep in mind that each state has its own requirements for each type of electrician depending on their experience and training.

Common Duties and Tasks of Electricians

In fact, it is tasks and duties that determine who are electricians.

For example, working on wiring a house, electricians need to follow certain rules such as safety, electrical code, functionality, and aesthetic, as well as some steps.

In order to complete a large-scale residential wiring project, electricians should consider such aspects as:

Using their knowledge and skills, electricians need to choose appropriate materials considering the specifications of a wiring system.

To be able to perform this task, they need to have an excellent understanding of such issues as:

The first central power station was created in 1880s however people understood the power of electricity since prehistoric times.

In various cultures and religions, there were important and powerful gods that wield lightning and electricity:

Of course, there may have been some big calls to understanding how to use electricity for humankind’s purposes.

Nevertheless, the first significant steps in this sphere were done only around 1600.

Back then English scientist William Gilbert published the first study about static electricity.

He discovered the way to produce static electricity using amber and cloth and introduced the word electro that is amber in Greek.

Later, in 1752, Benjamin Franklin held his famous key-on-the-kite experiment during a thunderstorm.

It has a significant impact on the development of our knowledge in the sphere of electricity.

However, even then people didn’t understand electricity well and saw it as something somehow divine.

Until 1884, there were lots of arguments about alternating current (AC) and direct current (DC), and their usage.

It was back then when the first transformer was invented.

Nowadays, most people take electricity as something granted and cannot imagine their lives without it.

In fact, electricity is an absolutely important part of the modern world.

Staying Updated in an Evolving Industry

We’ll need electricians as long as we use electricity.

However, the industry itself develops constantly so electricians’ duties change as well.

For example, Portland revised and renewed its electrical code and required all houses built after 2008 to be equipped with insertion resistant electrical sockets so children cannot put single-pointed objects there.

There are not only electrical code renovations but also constant development of the industry itself.

Considering the growth of the popularity of solar systems, modern electricians should be able to install and maintain solar panels.

Also, there are fiber optic and LAN cables that are relatively new and widely used.

Using their knowledge, skills, and experience, electricians can adapt to new technologies and environments so they can deal with various challenges.

If you want to learn about the newest regulatory requirements, you need to address your local regulatory agency.

Among the changes electricians should consider, there are:

Read the full guide: How to Become an Electrician