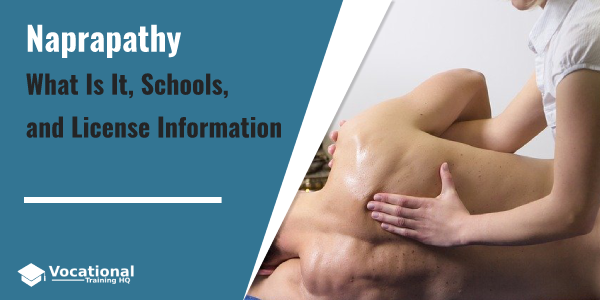 Naprapathy is a health field that deals with treating disorders related to connective tissues.

It includes such methods as tissue manipulation, nutritional counseling, and supportive modalities.

In fact, it is somehow similar to myofascial release.

It pays much attention to the fascia, the network of connective tissue surrounding the muscles, blood vessels, and other structures.

Find a Program Near You

You need to know that naprapathy is more comprehensive than a single bodywork modality.

It is often compared to chiropractic medicine.

Chiropractors are usually focused on spine treatment considering it the main aspect of health.

At the same time, naprapathy specialists believe that it is the fascia that can cause chronic misalignment.

Nevertheless, both these fields have a long-lasting history that started almost simultaneously.

Naprapathy appeared as a result of a split about underlying causes.

The specialists that usually work in this field are called ‘neuromyologists’.

The first this sphere appeared in Chicago and later it spread all over the country.

Despite it, this practice is pretty regional and can be found in such states as Illinois and New Mexico.

Speaking of the other countries, it is incredibly popular in Scandinavian countries.

According to the data, more than every third Swedes has applied for a naprapathy treatment.

The American Naprapathic Association claims that the most number of licensed and Board Certified Doctors of Naprapathy work in Illinois.

Also, the National College of Naprapathic Medicine says that loys of specialists that got trained in New Mexico and Illinois work in other states why holding licensing of massage therapists.

The National Provider Identifier Database provides data on naprapaths that work in other states except for New Mexico and Illinois.

You need to keep in mind that it is very important to follow rules and laws within a certain state or area.

According to the American College of Physical Medicine, these specialists should know how to evaluate structures such as muscles, ligaments, and spine.

Also, they should be able to use various tests including orthopedic and neurologic ones to recognize various health conditions.

In some cases, they may need to refer their patients back to their primary care doctors for more tests or further treatment.

According to the American College of Physical Medicine, there some healthcare plans that include naprapathy as well.

Just keep in mind that nutrition studies can be more extensive than on other levels.

The National College of Naprapathic Medicine program has three classes that are related to nutrition and diet as well as on the clinical nutrition approach to wellness.

You need to know that it is an essential part of all advanced programs in this sphere.

Achieving Licensure in the United States

You need to know that Illinois and New Mexico have pretty similar licensing standards.

It is the Illinois Department of Financial and Professional Regulation that is responsible for the licensing in the state.

To be able to get your license in the state, you need to have two years of a general college education as well as four-year training in the discipline.

Despite you need four years to get your training, according to the state regulations, it can be completed in 3 years.

The fourth-year can be replaced by clinical practice.

Most programs include 130 credits that are divided into 66 hours of basic science and 64 hours of clinical science.

Among basic subjects, there are anatomy, pathology, and neurology.

There are many similarities between Illinois and New Mexico licensing standards.

You need to complete the internship that includes 1000 hours of training as well as 350 full-credit accreditation.

If it is your first licensure, you need to pass an examination.

To get your license in New Mexico, you need to address the New Mexico Medical Board.

Just keep in mind that you need to have a two-year degree and four-year naprapathy training.

You can complete it just in a few years.

Most programs include 132 credits that are divided into two parts: 66 credit hours in basic sciences and 66 in clinical naprapathy.

The first part is focused on the connective tissue.

You need to pass an examination by the National Board of Naprapathic Examiner but if you obtained your license in other states or in Sweden, Norway or Finland, you don’t need to do it.

The Future of Naprapathy

The naprapathy has less research base that manual therapy as the last one can be applied for other spheres including massage therapy and physical therapy.

Most researches in this sphere are held in Scandinavia.

According to their results, naprapathic manual therapy is more effective when it comes to patients with non-specific neck or back pain.

The future of this sphere significantly depends on the further researches in this sphere.

There are some groups as well as individual specialists that work in this sphere.

For example, there is Dr. Nuzzo who is one of the most well-known naprapathy professionals in New Mexico.

Cancel reply
Find a Program Near You